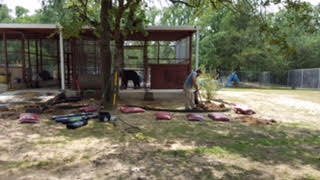 “I had only been to zoos to see any wild animal. Then, I met Carol. I went to PrideRock in 2009 for the first time. I was blown away and in awe of these magnificent creatures, especially the tigers. I met Damien (RIP) and all the others in an afternoon that I didn’t want to end. The sheer power of their private “calls” to one another and their large presence just astounded me. I learned what happens when you neuter a Lion, he looses his mane plus many more things I didn’t know. Although they can never return to the wild they seem to be quite at home and understand this. You can hear the roars when you get closer and it it awesome! ”
Brenda103, member of the general public, May 2016

The three black bears at PrideRock Wildlife Refuge in Terrell Texas will soon feel dirt and grass under their feet for the first time in their lives. Coco, Toro and Rowdy were brought to PrideRock late in 2015 year when a neighboring sanctuary ended up not being able to take them in. The bears are approximately 6 years old and after Phase II is complete in a few months, will be able to roam outside. The outdoor enclosures will include large tunnels for resting, playing and hiding, pools for playing and bathing and several large platforms for soaking in the sun and taking in a higher view. PrideRock owners Carol and Gary Holliman are dedicated to providing natural enclosures, species-specific diets and enrichment areas for all the animals in their care. Coco, Toro and Rowdy will no doubt enjoy their new outdoor facilities. We will be providing more updates as we get closer to releasing the bears into their new play area!