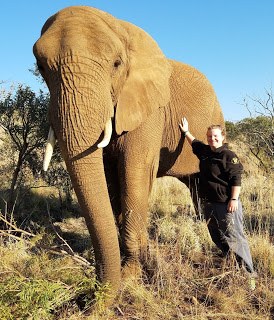 PrideRock Wildlife Refuge intern Taylor Bankston has fond memories of her month-long stay in South Africa, where she traveled for two weeks, and spent two weeks working at the Ann Van Dyke Cheetah Center and the Glen Afric Rehabilitation Center. Taylor traveled to Ponta do Ouro, Mozambique and Swaziland. She also visited a game ranch and went horseback riding.
While at the cheetah center, Taylor thatched fences so the cheetahs could stay cool and other animals could not see them. She also painted and cleaned. While visiting the rehab center, Taylor received up-close interaction with giraffes, zebra, elephants, wildebeest and more.

Taylor traveled with several college students from around the United States including five from Kent State, two from Texas, and one from New England and one from Montana. “Seeing the culture and being with the cheetahs was the highlight of my trip,” Taylor said. Taylor plans on returning to Africa in the future.