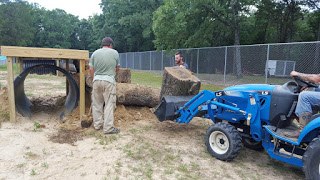 Rowdy, Coco and Toro, three North American black bears, were rescued by PrideRock Wildlife Refuge in Terrell Texas January 2016. They were raised in captivity in a sanctuary environment but had to be relocated due to the closure of the sanctuary. If the bears were not relocated, they would have faced euthanasia. So PrideRock came to the rescue, built a new enclosure specifically for the bears and gave them a new, peaceful home. Phase II of the enclosure is to build an outdoor play pen where the bears can be bears: their habitat will consist of pools, trees, platforms and plenty of room to romp around. We are beginning Phase II and thought we might want to see our progress. The PrideRock staff is anxiously awaiting the day Rowdy, Coco and Toro experience their all natural play pen for the first time.