Some Facts About Cougars 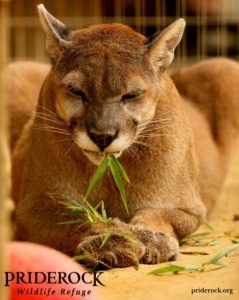 Cayman, was our first cougar and our first “big cat” at PrideRock.  He started our PrideRock journey.   Scuba diving was our passion before we started our love of big cats which would consume all of our time, and the Cayman Islands was one of our favorite places to dive.  We were going to go back there and then we got a little cougar from Corsicana, Texas, and decided to name him Cayman and thus ended our scuba diving for good because we knew that raising big kitties would be a huge commitment of our time and expense.

Cayman was a joy and great introduction into the big cat world.  We had him in the house with us for a long time before felt he was big enough to be outside in an enclosure near the wolves we had at the time.  He lived near them for a while, until we built out what would be our big cat compound and then he was moved into a new area where the other big cats ended up being.

We had him for approximately 11 wonderful years, but the last few years, he ended up going blind, but had become familiar enough with his surroundings that he was comfortable where he was.  His eyes were like marbles and I found myself being very defensive when people would ask what was wrong with his eyes.  We will never forget Cayman and what started the best days of our lives!

The first time I met the cougar Cherokee as much as I’d love to tell you it was a love at first sight thing, it was quite to the contrary.  Although it was her big beautiful eyes that drew me in, she greeted me by showing me every single one of her teeth and letting out a long five-second straight hiss as if to say get away from me you skinny little punk.  Every morning when I arrived at work I was greeted the exact same way because I walked right by her enclosure and after about the 30th time that I was greeted with the hiss my instincts kicked in.   I decided to show her all my teeth and hissed right back at her.  Her ears went down and she ducked all but her eyeballs behind a big wooden log so I did the same thing. I’d duck down and then she would tiptoe over to me in predator mode.  This went on for a few more days until I decided that when she was tiptoeing over to me to, to not look at her and just rest my head up against the enclosure where to my surprise she did the exact same thing and rubbed the top of her head against the top of mine and that was the first sign of the wonderful bond that we would come to develop with time.   As time went on our bond grew stronger and stronger and Cherokee grew older through the years and her horrible arthritis worsened and as the arthritis progressed she required more and more of my attention all of which I was willing to give without a moment’s hesitation.  We bonded through the brushings, grooming, and baths which were always a ton of fun.  Then there were the injections and the medications but even if it was just some company and affection, anything she needed.  I loved that pretty little girl more than life itself and when she passed away, it was so very difficult, but I found solace in knowing that she wasn’t suffering anymore and I made a vow to be the best me that I can be because I know when my time comes to walk to the Rainbow Bridge my “cherry pie” will be the first to greet me.

Apache and Lakota were rescued from a cougar breeder in November 1999, near Houston, Texas.

The pair were elderly and not breeding enough to suit the owner who had moved from his property and left them in a back-yard pen. That was a long and hard rescue, but worth it.

These precious cubs that were born on June 6, 2000, before we could provide separate enclosures for Apache and Lakota. The 3 cubs were raised by us in the house until they could be moved into regular cougar pens that we had to construct.

Cougars are classified as Dangerous Wild Animals by every state.  In the wild they would seldom even be seen if it weren’t for the growing encroachment on their home territory. When cornered, threatened or starving there have been attacks on people wandering through their territory.

Q: Do they act anything like cats? Are the cubs playful?

Cougars are the smallest if the “Big Cats” and the largest cat that can purr. They do have many characteristics as a domesticated cat.

Cougar cubs have claws as sharp as razors even at a few weeks old and they can play, but it has risks.

Q: What kinds of animals do they eat in the wild?

Q: Do they ever end up in animal hospitals from a car hitting them? Can a veterinarian work on a cougar, tranquilized I guess?

Cougars in the wild are at risk of being hit by automobiles; but cougars can be examined by veterinarians, safely only when tranquilized.

Q: What do they eat at Priderock? Meat from Walmart? Any kind of vegetables or grain or just meat?

I would say 5-8 lbs of meat, primarily horsemeat and chicken daily.

Q: Do you have to give them medical care or supplement their diet?

Yes, they receive a special diet which is formulated to meet the special nutritional need of exotic felines.

Please Help Us Help Them

(One of our playful cougars)

At PrideRock we cover all the needs of the animals, permanently.

The costs are extensive, especially with regards to feeding. Please consider making a tax-deductible donation to help us cover the expenses; we believe that such an investment is money well-spent, and that’s why we exist. Please join us now.