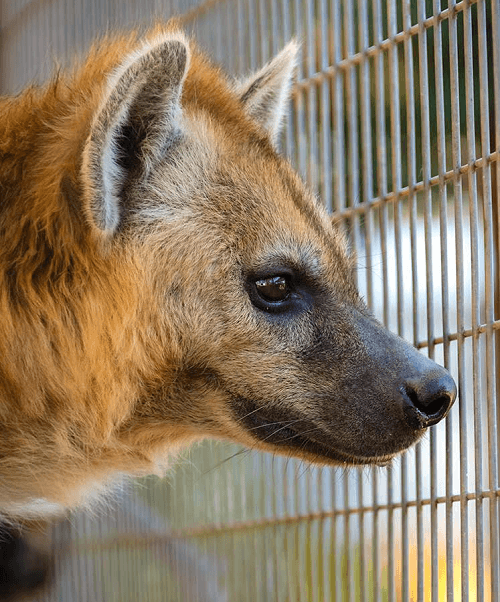 Hyenas are hugely misunderstood and are absolutely incredible animals, and they have some amazing abilities.

Some Facts About Hyenas

We have a hyena at Priderock named Helena. Helena is a beautiful healthy spotted hyena that is very intelligent and personable. She has developed a very close relationship with one of her keepers, Corey, after being quite skittish upon arrival a few years back.

PrideRock transported her to its facility from a private owner along with Diego, an African lion who she had lived with in separate enclosures for a number of years. It’s very difficult to find hyenas and probably most are found through illegal trade.

Helena is a scavenger by nature and often will bury her food and go back and eat it later.  She has gained a lot of weight since we got her and most of her African relatives who are thinner by nature probably wouldn’t recognize her. 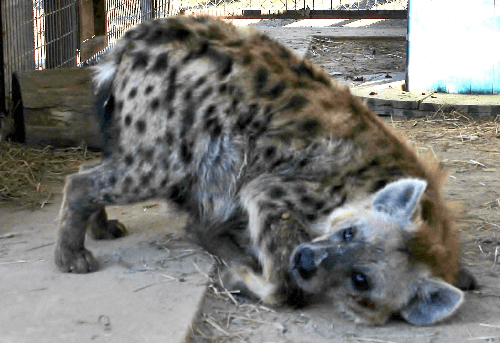 Helena is quite vocal and makes a variety of sounds which includes the laughing that you often hear about, which is often associated with stress. She is alert, loves to dig, play in her pool and plays peek-a-boo with her tiger neighbors.  She has been a total delight and we are blessed that she has joined the PrideRock family.

The general behavior of the hyena is skittish. It would be common for hyenas to exhibit defensive behaviors in new unknown situations, such as stomping, and the laughing that so many know about. But within the first couple days of arrival, Helena picked Corey, and never stomped or laughed at him. 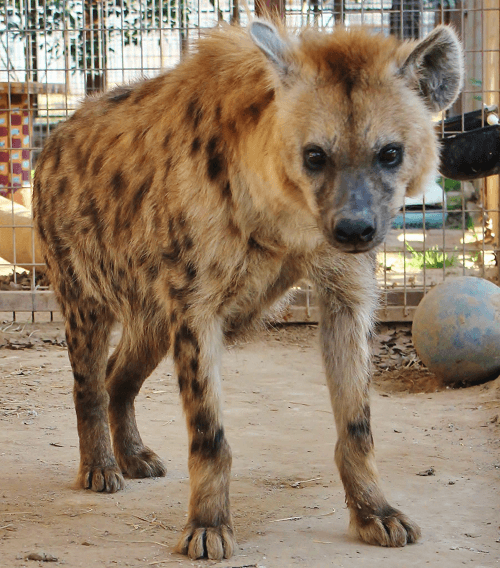 Some thoughts about Helena from Corey:

Personally I have never worked with hyenas before, but there was a magical connection, and we developed a bond. To the point where Helena was actually protective of me, making noise if another staff member would be walking up behind me

A hyena is actually a cat and not a dog, but when it comes to training, sometimes behavior is more like a dog, and thinking about dog behavior allows you to have a better sense of interpretation. When you want to know her mood, you pay attention to the pupils, ear position, and tail activity.

We give animals toys for activity. Helena’s favorite toy is a small pool – she loves to be muddy. She has coarse hair, dry skin, kind of like a hog. She loves the pool. Hyenas’ natural body odor is pungent, because they like rotting material. But Helena is probably the world’s most pretty smelling hyena.

For the first toy I gave Helena to help keep her active, I did research, and gave her a bowling ball to bat around with her paws, thinking she might do as the lions do, who like bowling balls. But it was a mistake. Hyenas have strong jaws, the strongest animal jaw there is. I came in the first night, and couldn’t find the bowling ball. And I thought – oh no, she ate it. But eventually I found it, and the bowling ball was crushed into four parts! It was a fifteen pound bowling ball, like a rock, and Helena just chewed it to pieces. Talk about a strong jaw!

Q: What have you learned from the hyenas?

The main thing is that TV does them no justice. They are cute – you have a depiction in your head, mangy and disgusting. Helena is beautiful. She’s just cute. Teardrop shape pupils.

Q: Are they dangerous?

Very dangerous, known to take down a lion.

Q: What is the laughing thing? is it emotion or a “call”?

If a tiger growls, it is like the laugh to a hyena. It also gets attention of other hyenas.

Q: Do they have moods? Are they playful?

Helena is skittish, but she likes to play.

Q: What do you feed them?

Raw meat, and we leave the bones in the meat. Some of it is donated from Walmart, people will donate deer.

Q: How much do they eat?

Helena eats about 20 pounds of meat per day.

Q: Do you have to give them medical care or supplement their diet?

They require regular medical care. They have bloodworm and routine checkups regularly. They have daily supplements for joint health, skin and dental health.

Please Help Us Help Them

At PrideRock we cover all the needs of the animals, permanently.

The costs are extensive, especially with regards to feeding. Please consider making a tax-deductible donation to help us cover the expenses; we believe that such an investment is money well-spent, and that’s why we exist. Please join us now.