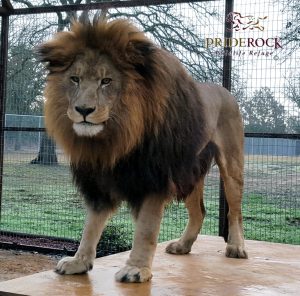 PrideRock’s most beloved lion, Leo, is believed to be of Barbary lion descent.

Barbary lions have been considered extinct in the wild since about the mid-1960s. One of the most prominent characteristics of the Barbary lion is the very dark and long-haired mane which extend over the shoulder to the belly. This rare lion species is considered the largest of all the lions weighing more than 600 pounds and measuring more than 10 feet in length.

Barbary lions inhabited the Barbary Coast and parts of Algeria. The Romans used the lions to battle with gladiators and persecute the Christians in the Roman Empire. The last Barbary lion to be shot and killed was reported to be in 1942 in the Atlas Mountains although some of these gorgeous animals were sighted in Morocco and Algeria into the 1950s and 60s.

In June 2016, Wisconsin Big Cat Rescue claimed to have two female lions born in 2001 which have been shown to be Atlas lions. An animal park in New Castle, PA, also claims to have a pair of Barbary lions and the Zoo des Sables d’Olonne in France claims to have male and female Atlas lions.

WildLink International and Oxford University are currently working together to “breed back” the Barbary lion in hopes of repopulating the national park in the Atlas Mountains of Morocco. The two facilities have identified a handful of lions in captivity around the world which may be descended from the original Barbary lion. In 2010, two lion cubs were moved to the Texas Zoo in Victoria to hopefully preserve the species under the WildLink International Conservation program. It is unknown, however, if the cubs are of Barbary lion descent.

PrideRock Wildlife Refuge believes it has a Barbary lion. Our most beloved and famous of our lions, Leo, has Barbary lion characteristics.  Leo is very near and dear to everyone’s hearts here at PrideRock and we hope he will be in our presence for as long as possible.